Just a reminder that last Wednesday, 6th December, was our last practice in the bandroom for this year.  But don't forget we have quite a few jobs coming up between now and Christmas.  We will return on Wednesday 10th January 2018.  Merry Christmas and Happy New Year to all
Posted by Bb Bass at 15:30 No comments:

Jeff's funeral service will be held on Thursday 17th August at 11.30 am in the chapel at Bron y Nant Cemetery, Mochdre, Colwyn Bay, followed by interment at 12.15.  The band will be playing for the service.
Posted by Bb Bass at 11:21 No comments:

It is with deep sadness that we announce the death of our Honorary President, Jeff Hughes, on Saturday 5th August 2017.  Jeff was a founder member of the band and its chairman until failing health forced him to resign earlier this year.  Our thoughts are with Liz at this difficult time.  Funeral arrangements will be posted here when available
Posted by Bb Bass at 13:00 No comments:

The Dayband were out again on Tuesday at the Abergele Community Party, organised by Abergele Dementia Friendly Community.  We all had a great time, playing loads of old tunes like "Two Lovely Black Eyes", "Down at the Old Bull and Bush", and "Keep right on to the end of the Road"  from selections called "The Gay 90s" (1890s, not 1990s!) and Florrie Forde's Favourites.  Everyone there joined in the singing, and some danced as we played.  What a brilliant afternoon.  Thank you to the organisers for inviting us, and it's great to hear that Abergele has now been officially recognised as a Dementia Friendly Community.  Photographs of the day are in our Gallery and on the Facebook page.
Posted by Bb Bass at 11:39 No comments:

The Dayband plus a few others played for the annual Llandudno CYTUN Service outside Holy Trinity Church.  It was great that Big Jim was also able to be with us.  That corner was just as cold as always, but at least we had our big coats to keep us warm.  And the rain (more or less) kept off! 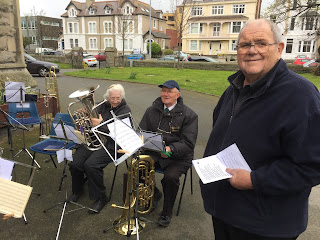 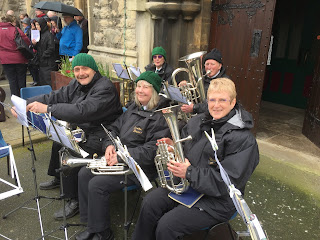 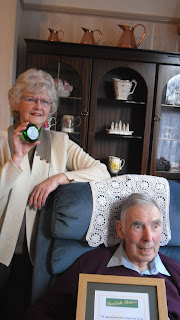 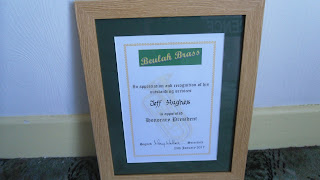 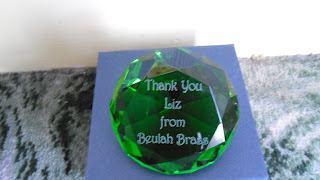