Brass players from across North Wales and Cheshire congregated at Abergele youth and Community Centre on Saturday 28th April to take part in a Brass Band Workshop.

Hosted by Abergele's own band, Beulah Brass, the workshop was led by Mark Wilkinson, with tutors Anna Hughes-Williams, Heather Linnell,

The students, with varying levels of ability, and with ages ranging from 11 years to mid-70s, studied varying musical styles, including Westward Ho, Vitae Lux, All in the April Evening, Vuvuzela, and Prismatic Light. A full band warm-up session and full band/sectional rehearsals were held, with everyone receiving support and encouragement from the experienced tutors.

Questions and answers followed the final session, after which a short concert was held, to which friends and family were invited free of charge. The concert began with a selection of pieces from the tutors' ensemble which showcased their prowess as players, and was followed by the workshop band, who, with a great sense of achievement, performed the pieces studied throughout the day. 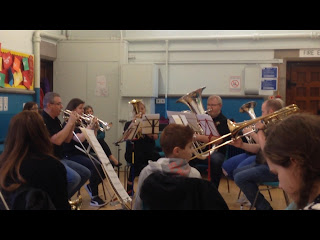 It proved to be a very successful and enjoyable event, and, as one of the participants was heard to remark "It was amazing to make so much progress in a day!"
Posted by Bb Bass at 08:43